What are the largest and smallest fish in the ocean?
Cad iad na héisc is mó agus is lú san aigéan? 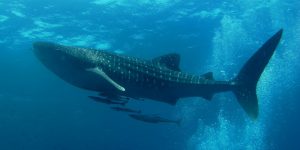 The smallest fish is the Paedocypris progenetica and was only discovered in the last decade. It is a member of the carp family and lives in forest swamps on the Indonesian island of Sumatra. Mature females measure just 7.9 millimetres!

Do fish sleep?
An gcodlaíonn iasc?

Yes! However, it is not exactly the same as how humans sleep. There are some obvious differences; fish don’t lie down, tuck themselves into bed and close their eye lids! In fact, only shark species have eyelids and they use them to protect their eyes when they have close encounters with other fish. Others differences are less easy to spot, like the fact that fish never go into REM sleep and some shark species have to keep swimming while they sleep, as they need constant water flow over  their gills to breathe. But the general idea is the same as in humans, sleep is a period when activity and metabolism slow way down as a way to conserve energy and restore the body. So how do you spot a sleeping fish? Depends on the fish species, but it just looks like the fish is daydreaming. Some fish sleep in coral, others sleep close to the bottom and some nestle into sand. Depends on each fish and each habitat!

How is the age of a fish determined?
Conas a bhfaighaimid aois an éisc amach?

It is a very similar process to finding out the age of a tree by using growth “rings”. Growth “rings” on scales, and/or ring-like structures found in otoliths (small bones of the inner ear) are examined and counted. The rings correspond to seasonal changes in the environment and can be compared to the annual rings of tree trunks. A series of fine rings are laid down in scales for each year of life. In summer, the rings grow faster and have relatively wide separations; in winter, slower growth is indicated by narrow separations between rings. Each pair of rings (both winter and summer rings) indicates one year. Because scale rings are sometimes influenced by other factors, scientists often use otoliths, whose ring-like structures also indicate years of life.

How do fish protect themselves?
Conas a chosnaíonn iasc é féin?

The ocean can be one of the most hostile places on earth and creatures living there must develop specialised defences in order to cope with the dangers that most threaten them. Here are some of the important defensive adaptations: